Billy Yargus-Woodhaven Pro Staff and NWTF Grand National Champion
I have hunted in Mexico the past two years with Jay Scott and have booked another hunt for the 2020 spring season.  Jay runs a top of the line Goulds Turkey Hunt and I recommend Jay Scott Outdoors to all of my friends.  It is truly a hunt of a lifetime.

Scott Ellis-Woodhaven Pro Staff and NWTF Grand National Champion
If you are looking for a Gould's turkey hunt look no further than Jay Scott at GouldsTurkeyHunt.com.  Jay's dedication to making the ultimate Goulds experience is unprecedented.  His success rate speaks for itself!

Steve Rinella of Meateater TV Show and Podcast
Jay Scott and Darr Colburn will give you the best turkey hunting experience you've ever had. They knew the area well and had a lot of gobblers lined up. We hunted two mornings and called in many birds. One day I passed on two mature gobblers that were strutting ten yards away just because I was having so much fun. Shot the third to come in. The other morning was similar; could have killed multiple turkeys and shot a mature tom that was gobbling and strutting his tail off within yards. (We filmed the hunts, so I have irrefutable proof.) The border crossing was no issue. Ditto with the firearms importation process. The people knew Jay and it was simple. Any uncertainty I felt about that part of the process was quickly alleviated. Accommodations were quite perfect. Clean, well-furnished, hospitable. The workers at the ranch were happy to have us and they showed it. Food was great, with nice regional color. Really, it's a magical place and a magical hunt. In my occupation I've seen it all, and these guys are the best of the best. Smart, curious, humble, and deeply inspired by the hunt

Aaron Warbritton-The Hunting Public
If you are looking to complete your Royal or World Slam, Jay is the man!  Hunting out of the country can be a logistical nightmare but Jay is a pro and there were no surprises on our trip.  Not to mention there were turkeys everywhere!

Andrew Briggs
I've hunted turkeys my whole life, and I've had many hunts and every one of them was unique.  None of them compared to hunting Gould's in Mexico with Jay Scott.  The accommodations and the habitat were excellent but the hunting was truly exceptional.  You wont find a better outfitter for your hunt

Dallas Strait
My father and I enjoyed our hunt with Jay Scott of GouldsTurkeyHunt.com so much.  We have taken our World Slam and this hunt with Jay was the most organized and well planned logistics from A to Z.  Awesome hunting!  We highly recommend Jay Scott and his crew for anyone looking at a Goulds Turkey hunt.

Tony Beverly
I would like to thank Jay Scott Outdoors for making my Royal Slam quest and awesome experience.  Attention to detail, scouting, accommodations were top notch!  I recommend this hunt to anyone who still loses their mind a little in the spring.  Our wives tagged along and were in love with the beautiful ranch.  I know, good Lord willing we will be back!

Chris Coffey
I had the pleasure of completing my Royal Slam with Jay Scott and Hunter Haynes of GouldTurkeyHunt.com.  Jay exemplifies what you look for in a guide and outfitter.  His passion, excitement, hunting knowledge, and love for turkey hunting become quickly evident when hunting with him.  The beauty of the hunting property and number of Goulds turkeys was very impressive and the aggressive nature and vocalizations of the turkeys made for some incredible calling.  It was truly and amazing hunting adventure and experience!

Rick Oliver
If you want a Goulds for your Royal or World Slam don't spend your time and money elsewhere but with Jay Scott and his guys.  Top Notch!

Tim and Jacque Phillips
Our Mexico Goulds turkey hunt more than met our expectations.  It was truly a trip of a lifetime and we completed our double Royal Slams.  Jay Scott Outdoors and his amazing staff took care of every detail.  We can't wait to go again!

Mahlon Stoltzfus
An incredible turkey hunting experience.  Going on a Goulds Turkey hunt will be a thrill ride.  I highly recommend Colburn and Scott Outfitters/GouldsTurkeyHunt.com!  Jay, Chris and Hunter our guides were great!  The ranch that we stayed at and hunted was a true hunting dream.

I am currently on the Cabelas Spring Thunder prostaff and have had the opportunity to turkey hunt some of the best places in the country. I can honestly say I have never hunted any birds like the Goulds before. They are extremely responsive to calling and love to gobble !!!  I will return to hunt with Colburn and Scott Outfitters and plan on bringing my son to witness this turkey paradise that they have to offer.

David Williams
What can you say about Colburn and Scott Outfitters?  The real question is what can't you say.   When my group and I set off for a Mexico Goulds turkey hunt, we had no idea how the birds acted or what they responded to.  On top of that we had to go across the border, but Jay and Darr were completely on point.  They took care of all the paper work and transportation to and from the airport.   The country was absolutely gorgeous while the accommodations were very unique and fitting to the atmosphere around you.  Now for the hunting,  I have never had so much fun turkey hunting.  Jay and Darr had done their homework and knew which draws and canyons were used more and put us on them.  The birds work great, are extremely vocal, and could not be any prettier!   You better believe I will be back.   If you do not believe me you can check out mine and Andy's hunts online at Cabelas SpringThunder 2013.

Joe Bittner
I set out to complete my Royal Slam with my Long Bow. And after seeing Jay Scott featured on a TV show featuring the Goulds Turkey I contacted him and let Jay know about my interest in getting the Goulds Turkey.  Jay Scott was quick to respond back and the trip to Mexico was booked.
Jay Scott and Darr Colburn are two of the best guides I have met. They are very professional and proficient in getting you across and back from Mexico.  I arrowed my two Goulds the first night in Mexico, and the first one of their clients to have completed a Royal Slam with a Long Bow.
If you are thinking about getting the Goulds Turkey and completing your Royal Slam I highly recommend Jay and Darr.  I would not hesitate to book another trip with them for future hunts.

I had the opportunity to hunt with Colburn and Scott Outfitters in 2013 in Sonora Mexico and completed my Royal Slam.  The birds were plentiful and the scenery was spectacular.  Their knowledge of the territory and the bird habits was outstanding.  The accommodations were wonderful.  This was one of the best hunts I have ever been on, and is certainly an experience of a lifetime!  I was able to bag two Gould's gobblers in a couple of days.  I would recommend Colburn and Scott Outfitters without reservation and hope to return to hunt with them again soon!

Matt Allen
If you want to hunt Goulds turkey then Jay Scott's outfit is who you want.  Crossing the border was a breeze the agents all seem to know him by name.  I harvested a huge bird with Hunter Haynes who works for Jay on the first night to the ranch. I plan on returning with my sons for a hunt soon.  Book a hunt with Jay! It will be top notch! 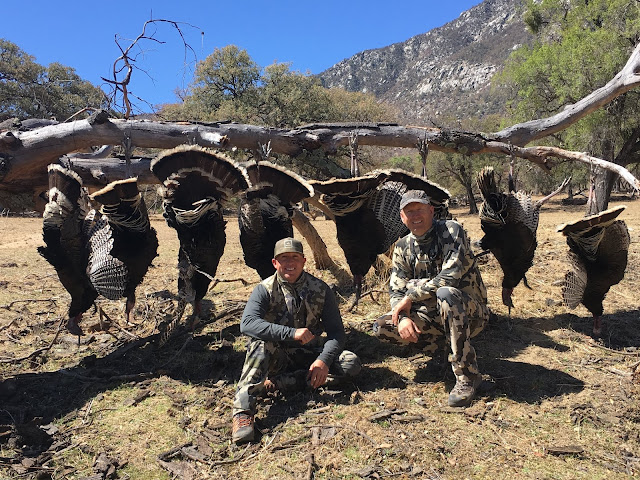